I liked Rob's top 5 training books, so I thought I would do my own, if only to answer my own question of what would my top 5 list be?

There are some books that I find myself returning to over the years, and I’ve read each book in this list many, many times. So my list, in no particular order:

Gates of Fire: An Epic Novel of the Battle of Thermopylae
by Steven Pressfield.

This is the only work of fiction on my list. I admit that I probably read this book 2-3 times a year. It tells of the Greek defense of the narrow pass of Thermopylae against the invading Persian forces, told through the voice of a Spartan helot (slave) who is the battle’s only survivor.

Its encapsulation of warfare as an activity of mortal humans, societies, and abstract principles is masterfully done. There’s a reason why it’s on the Commandant of the Marine Corps’ reading list, and taught at West Point, Annapolis, and the Marine Corps Basic School at Quantico.

Unlike the comic book/movie 300 (which was entertaining), Gates of Fire includes historical details that really make the events and characters seem real. From a budo perspective, the attitudes of the Spartans toward warfare — indeed, toward life itself — may be an idealization, but still not a bad attitude for a soldier to have. The Battle of Thermopylae happened 2500 years ago, but it still continues to inspire people today. Gates of Fire is a great continuation of that tradition, with a realistic story whose characters and actions are easily recognizable to us today.

The Unfettered Mind: Writings from a Zen Master to a Master Swordsman by Takuan Soho, translated by William Scott Wilson.

Written by the famous Takuan Soho, a Buddhist monk of the Rinzai sect, this series of letters was directed to Yagyu Munenori, the head of the famous Yagyu Shinkage ryu sword school and sword instructor to the Shogun. Written with a mind toward the layperson, it’s light on Buddhist terminology while still conveying the spirit of Zen Buddhism.

Most interesting from a budo perspectiive is that Takuan wrote to Munenori using terms that could be readily understood by a warrior. His advice is dual layered, speaking not only about Buddhism but the application of Buddhism toward swordmanship (and warfare in general). Anyone who has practiced martial arts can immediately grasp the significance of Takuan’s advice about not letting your technique (or your mind) be captured by the enemy. In today’s world of constant distraction, such advice seems more relevant than ever.

Novice to Master: An Ongoing Lesson in the Extent of My Own Stupidity
by Soko Morinaga, translated by Belenda Attaway Yamakawa.

This was the only book that Rob and I both had on our lists. When I first read it, I was humbled by Morinaga’s honesty about his own shortcomings (easy enough to recognize some of them for my own, harder to honestly own up to them). The early chapter about trash was especially effective.

Morinaga’s journey from an ignorant novice to an accomplished master (he eventually became head of the temple where he first started his studies) provides humorous, poignant insights into one man’s journey to find some meaning in Japan after the turmoil of World War II. It’s a short read, which is like Morinaga’s story — you just want more and more.

Essence of Ninjutsu: The Nine Traditions
by Masaaki Hatsumi.

This book is my favorite of Hatsumi sensei’s, because it’s not about techniques. His early admonishment that this book is about reading between the lines turns out to be quite true. Unlike many martial arts books, this one isn’t a straightforward explanation of the art. Instead, it uses anecdotes, legends, history, and ideas to convey the feeling of what ninjutsu really encompasses.

Just as the study of taijutsu changes as we progress in our understanding, my own understanding of Hatsumi’s words in this book changes. A simply fantastic book. 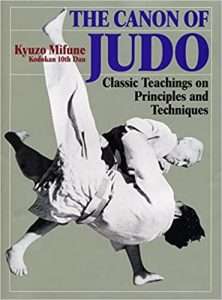 The Canon of Judo
by Kyuzo Mifune

If you’ve never seen old footage of Mifune doing randori, do yourself a favor and watch some amazing videos on YouTube. When you’re ready to work your way through Mifune’s training and perspective on judo, pick up a copy of this book. It might be out of print, but it’s worth the read for Mifune’s clear thinking and insights into kuzushi-based martial arts, which of course applies to much of what we do in the Bujinkan.

Learning from the past

Learning from the past

The background on our martial art

We need all the help we can get

Ukemi for Beginners, Part I

Every Bujinkan practitioner needs good ukemi, and starting with great habits is crucial.

The Care and Feeding of Translators

So how exactly should we treat translators when we’re in class?

Training with an Injury

As anyone who has trained with me recently knows, I have been the lucky recipient of three knee surgeries in the past year and have been unable to practice taijutsu during that time. I have only recently begun to attend classes again and this article is about some of the things that I have learned from training (or not training) with an injury.